Tom O'Neill, President & CEO It was one of those days—a pleasant evening, a family spending quality time together. All was well until they started to notice something odd. Their 55-year old mother was behaving quite differently than usual. As the days went by, they realized that their mom’s character was progressively straying farther from the normal. Scrolling down page after page on the web, her husband discovered that these changes were the initial symptoms of dementia. In a consultation that followed, the physician suggested testing her cognition. While the assessment was in progress, the husband felt irresolute regarding the reliability of the test, as he saw the doctor using paper and pencil to conduct the tests. He couldn’t help but wonder how efficient these old-school methods would be, in the 21st century?

Unfortunately, he is not alone. Driving brain health awareness and improving access to cognitive screenings are among the most important and urgent challenges of the 21st century. There are millions in the U.S. who need up to date and effective solutions for the early detection of cognitive decline. While the U.S. healthcare system encourages screening and testing for many diseases or conditions, there is no standard of care for screening/testing of cognitive decline up to and including Alzheimer’s disease. Cognitive screening or testing is often performed too late; when the person already has permanent cognitive impairment and when the caregiver needs help and intervention with their loved one.

Only 1 year after the launch of the Gen 3 device called Cognivue Advance™, Cognivue is launching their Gen 4 device with two unique software packages, Cognivue Clarity™ and Cognivue Thrive™. Cognivue Clarity will have both the ten-minute and five-minute cognitive assessment for MDs due to its detailed cognitive reports. Cognivue Thrive will be a five-minute screening which is for non-MD users and provides a baseline cognitive assessment. It focuses on optimizing cognitive performance in our activities of daily living (e.g. work, sports, wellness etc). This fourth gen portable device from Cognivue mitigates many of the challenges associated with cognitive testing.

Weighing just under eight lbs, the portable device, with a powerful battery that lasts up to 8 hours, will make cognitive testing more convenient and efficient. Cognivue is all set to launch this Wi-Fi-enabled device that can communicate data through a HIPAA-compliant cloud database, in January 2020.

“Cognitive decline is not a normal part of aging; however, aging becomes a risk factor if certain underlying conditions are not treated or managed properly and timely,” says O’Neill. According to the World Health Organization, the proactive management of modifiable risk factors can delay or slow the onset or progression of the disease. Some cognitive impairment is even reversible. However, the lack of detection and treatment can lead to severe consequences. “Dementias including Alzheimer’s disease are a tsunami coming that is not only a healthcare issue, but a society crisis that will affect hundreds of millions across the globe,” says O’Neill.

Over the past year, we have invested a significant amount of resources into building out customer channels in optometry, audiology, retail pharmacy, employee wellness, assisted living, rehabilitation, and home health

Couple this with the fact that today, 5.7M Americans are living with Alzheimer’s disease, and by 2050, this number is projected to rise to nearly 14M. Even amidst such alarming statistics, testing for cognitive issues or neurocognitive disorders is still in the dark ages. Cognivue technology was intuitively designed to eliminate these challenges.

By calibrating each individual’s motor and visual abilities and adapting to the patient’s performance, this patient-centric, adaptive psychophysics technology-based solution allows customized tests to be conducted for each individual patient, depending on their unique visual and motor capabilities.

The Cognivue test consists of ten, one-minute, separately scored sub-tests that over the course of ten-minutes provides a two-page, easy-to-interpret reports that include an overall score, with a subsequent breakdown into six key cognitive domains aligned with current standards: visuospatial, executive function, naming/language, memory, delayed recall, and abstraction. The second page has information on 2 additional important parameters: Reaction time and speed processing.

Identifying the increasing demand for a quicker screening in the market, Cognivue is also introducing a five-minute assessment test based on its unique FDA-Cleared technology. Cognivue’s five-minute test has three key cognitive domains: visuospatial, memory, and executive function, followed by reaction time and speed processing data for rapid evaluation.

The Outset for Next-Gen Apparatus

Cognivue’s journey began in 2005 with a grant from the NIH Eye Institute. The company, then called Cerebral Assessment Systems filed and received an FDA 510K class II de novo clearance in 2015. In order to align with the changing needs in the cognitive testing landscape, Cognivue came up with its most recent device, Cognivue Advanced in November 2018. It was launched with improved functionalities and user interface. The system with Wi-Fi for software updates allowed remote patient data entry and convenience of use.

The deployment of Cognivue Advanced has brought a revolution to the cognitive testing landscape. However, from clients’ feedback, Cognivue realized the desire for an easy-to-use mobile device. Cognivue Advanced was not mobile; moving it from one examination room to another was a challenging task for clinicians. On top of that, it had to be plugged and unplugged every time it was moved. The weight and size of the device also impeded customer adoption. The new Cognivue device will eliminate many of the challenges associated with the previous systems. The Gen 4 device is Cognivue’s most anticipated launch to date.

All three devices are built on the same technology platform, and they possess advanced features that enable clinically validated cognitive assessments. The features include the CogniCover™, a protective barrier surrounding the display, which eliminates distraction and light interference and offers specific dimensions for every patient. To give an accurate measure, Cognivue’s CogniWheel™ minimizes all variance in patient response performance by providing one degree of freedom. The CogniSystem™, which is the system’s scientific algorithm, utilizes adaptive psychophysics and calculates the easy-to-interpret scores.

With its reliable and innovative offerings, Cognivue has garnered a broad customer base. 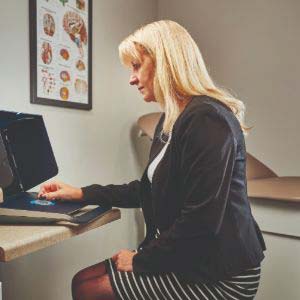 In one instance, a client was using paper and pencil-based assessments for cognitive testing and replaced their legacy models with Cognivue. The solution helped the client to improve their overall patient outcomes and increase the number of appropriate referrals to neurology and psychiatry, while decreasing unnecessary referrals within their system. This ultimately helped them minimize their operational cost and enhance patient outcomes.

There is a common myth that all cognitive issues lead to dementia. However, there are many underlying conditions that may impact cognitive functions, such as unhealthy lifestyles, cardiovascular/metabolic issues, sleep disorders, neurological issues, sensory side effects from loss of vision or hearing, and polypharmacy. Early detection of cognitive decline due to any of those factors can make it manageable, treatable and in some cases, reversible. Taking that into consideration along with the significant need within the healthcare system to broaden cognitive testing beyond traditional primary care, neurology, and psychiatry channels, Cognivue decided to carve new customer channels. “We have made significant investments in channel development across optometry, audiology, retail pharmacy, employee wellness, assisted living, rehabilitation, and home health,” says O’Neill.

"Based on FDA-cleared technology, our computerized test of cognitive function is the first-of-its-kind in the world. With Cognivue, medical practitioners are able to detect cognitive decline and manage the underlying causes of decline when it matters. Early detection leads to better patient outcomes and promotes cognitive health in all stages of life"

Similarly, Cognivue pays special attention in delivering their expertise to assisted living and rehab, considering their intrinsic role in the care of the elderly and injured who are vulnerable to develop cognitive disorders. Retail pharmacies have also expressed their interest in getting actively involved in screening for cognitive functions. Considering their widespread presence in the country, Cognivue considers retail pharmacy as a great medium to reach more people. Cognivue also plans to extend its offerings to assist businesses in employee wellness programs and continue to promote cognitive health at all stages of life.

The Unique Way to Success

Cognivue’s strong competitive advantage is attributed to their robust customer support and high quality of service offerings. In order to extend its services to new customer channels, Cognivue has deployed channel-specific leaders and has conducted field operation studies as a part of their initiatives to achieve customer satisfaction across all channels. As the company starts to scale up significantly, according to O’Neill, “the focus remains on driving cognitive health awareness and earlier testing, which will ultimately drive better patient outcomes.”

Cognivue currently has 17 patents, which is not only a testament to its technical expertise but also to its focus on social responsibilities. By 2020, Cognivue is planning to expand outside of the US and establish its presence in EMEA, Canada and Latin America. 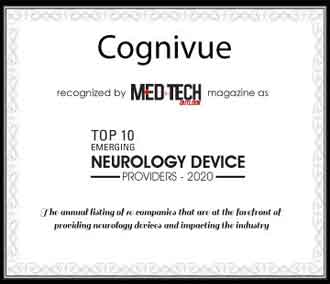