Kirk Zeller, CEO and Co-Founder and Brett Follmer, CTO and Co-Founder Globally, there are over 13.7 million new cases of strokes each year, with a major percentage of them being ischemic strokes.

Though doctors today know the causes and implications of a stroke, the treatment methods weren't always the same. One of the earliest known treatments for stroke was carotid artery surgery, where surgeons operated on the carotid arteries to reduce cholesterol build-up and remove blockages that could lead to a stroke. While this surgery certainly helped prevent stroke, few treatments were available back then to treat a stroke and its after-effects.

"In the early 90s, people were talking about treating ischemic stroke as the holy grail of the medical devices industry. Though complete cure remained a far-fetched dream, they had a belief that someday, they would find a way," mentions Kirk Zeller, the CEO and Co-Founder of Progressive NEURO, Inc. 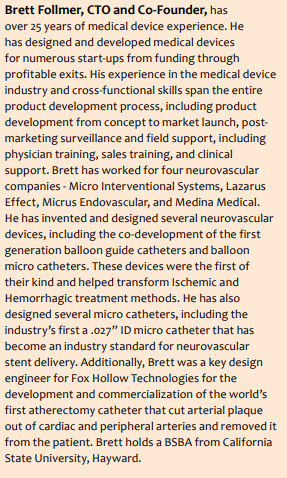 It wasn't until 1996 that hospitals introduced a more effective treatment. During that year, the U. S. Food and Drug Administration (FDA) approved the use of tissue plasminogen activator (TPA), a medication that breaks up the blood clots that caused ischemic strokes. As advancements such as TPA came to the surface over the following years, Zeller—who was keenly keeping an eye out—recognized the significant clinical challenges associated with using the traditional aspiration and thrombectomy system for treatment.

To put things into perspective, the thrombectomy devices used for ischemic stroke had great scope for improvement. Zeller mentions, "Aspiration (suction) catheters alone successfully remove clot in a little more than 50 percent of the cases and the remaining cases require the use of adjunct devices including stentrievers." Traditional stentrievers are stents on a wire which require aggressive (sharp) struts to cut into and work their way through the clot. However, these aggressive struts are believed to cause damage to the vessel wall while they are dragged along. In most cases, clots are not removed in "one pass," which increases the chances of further vessel wall trauma. Ultimately, when the clot is engaged, much of the clot hangs outside the retriever and is at risk of escaping distal as it is pulled through tortuous vessels.

Zeller's constant thoughts on finding a better, superior medical device gradually saw the light of day as he joined Micrus Endovascular Corporation. "I met a like-minded visionary, Brett Follmer, who was working in Micrus's R&D wing," he says. Like Zeller, Follmer also had a similar vision of providing alternative methods to traditional aspiration and thrombectomy.

We believe Progressive NEURO, Inc can enable physicians to save the lives of many patients who experience an ischemic stroke, and minimize the impact that the stroke has on their lives in a cost effective manner

To develop a device that can remove the clot in one pass and contain the clot without inflicting major damage to the vessel wall, Zeller and Follmer laid the stepping stone of Progressive NEURO, Inc. in 2018. Incubated at the Silicon Prairie Center—a unique collaborative entrepreneur live and work incubator community founded by Zeller—Progressive NEURO, Inc. is on a mission to give the physicians Progressive Stroke Solutions, which are not simply incremental improvements of stentrievers or aspiration catheters.

"We believe Progressive NEURO can enable physicians to save the lives of many patients who experience an ischemic stroke, and minimize the impact that the stroke has on their lives in a cost effective manner," says Follmer, the CTO and Co-Founder. The company has been designing devices intending to capture a clot in one pass, preventing it from escaping distal or going to an unaffected territory, and minimizing vessel wall trauma. "Complete and immediate clot removal relies on optimizing clot engagement, comprehensive clot coverage, and eradicating fragmentation and distal embolization," says Follmer. As such, Progressive NEURO Inc's focus is to advance mechanical thrombectomy efficacy through the novel development of clot retriever devices that surround clots and maximize first-pass efficacy rates through the OMBRELLO™ Enclosed Thrombectomy system. It is the first of a kind device that has the ability to surround clots, improving both the first pass removal rates and clinical outcomes. This leads to better neurological results, low mortality, lower hemorrhagic transformation rates, and reduced risk of procedural complications. Additionally, the portion of the device that comes in contact with the vessel wall is much less abrasive than stent struts.

Many years of stroke experience, numerous physician insights and engineering principles have propelled the design of this mechanical thrombectomy technology. Through superior radiopacity, this technology offers sharp visualization to track device placement and deployment.

Progressive NEURO, Inc. also offers the TROMPETA™ Aspirectomy System, a two-part system featuring a highly navigable aspiration catheter and nitinol device that expands to near vessel size to help facilitate the aspiration of the firm and organized clot from the vessel. The system's unique features help to completely cover the clot , significantly reducing the chance for distal clot fragments causing any further challenge. The TROMPETA™ Aspirectomy System clot extraction capabilities may be further enhanced by integrating a mechanical agitator that helps break up the clot into smaller pieces for improved aspiration.

The agitator is deployed and operated within the funnel portion of the device, enhancing function with no forceful contact with the vessel wall. "Firm organized clot can be a challenge for most aspiration catheters. During the clot removal process, it is quite common for the clot to be corked at the distal end of the catheter, creating a mushroom effect. This requires supplemental aspiration thorough the guide catheter during clot removal. Even with the use of supplemental aspiration, there is no guarantee that the clot will not be lost during the removal process," says Follmer. "Our approach is to suck the clot back into the TROMPETA™ Aspirectomy System’s clot containment device which is of similar diameter to the vessel and believed to be capable of accommodating even large clots." The TROMPETA™ Aspirectomy System surrounds the clot, minimizing the risk of losing the clot during the removal process. 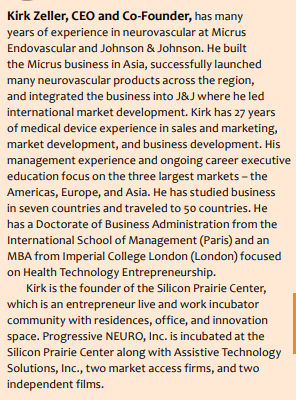 Envisioning a New Era of Aspiration and Thrombectomy Systems

The Progressive NEURO's technology has been a topic of discussion among the physicians and advisors. They believe that the designs may represent a platform technology that can effectively remove clots from other parts of the body. Zeller informs, "We have recently added additional physician advisors to assist us on the effectiveness of these technologies for indications such as deep vein thrombosis (DVT) and pulmonary embolism (PE)." The deep vein thrombosis (DVT) market is a rapidly growing market that needs more effective clinical options. In February, Progressive NEURO, Inc. completed the first phase of testing at the Silicon Prairie Center on designs optimized for DVT and PE. This testing was performed by its interventional radiologist advisor, Dr. Gregory Gordon, experienced in these procedures and ischemic stroke.

Foreseeing an aggressive growth trajectory, Progressive NEURO, Inc. has recently closed its seed financing round and will soon begin raising Series A financing, which will take the company through the 'first-in-man' stage. "We're trying to be as thoughtful and capital efficient as we can," concludes Zeller. 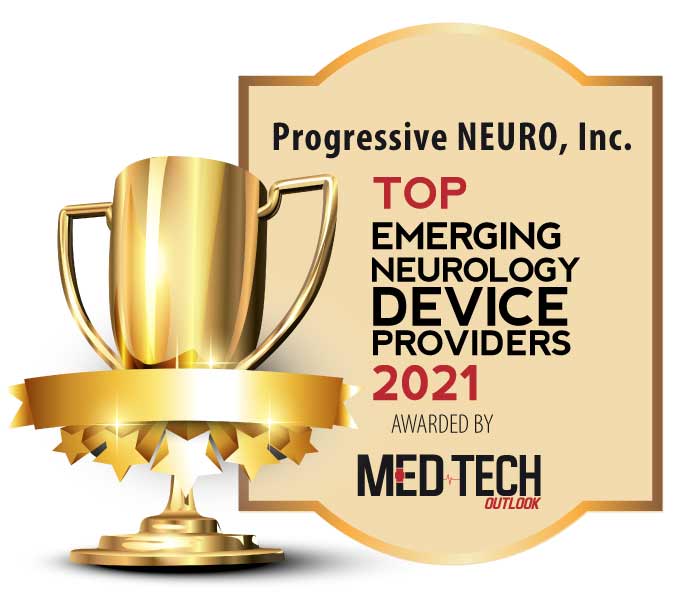 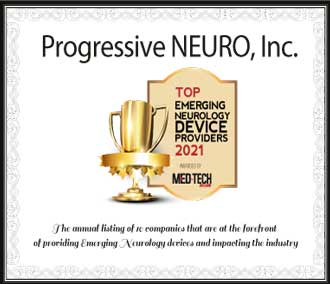 Description
Progressive Neuro, Inc. is a Silicon Prairie Center incubated medical device company dedicated to the development of Progressive Stroke Solutions. The company has been designing devices intending to capture a clot in one pass, preventing it from escaping distal or going to an unaffected territory, and minimizing vessel wall trauma. Progressive NEURO Inc's focus is to advance mechanical thrombectomy efficacy through the novel development of clot retriever devices that surround clots and maximize first-pass efficacy rates. Doing so, they enable physicians to save the lives of many patients who experience an ischemic stroke, and minimize the impact that the stroke has on their lives in a cost effective manner